The riddle of the flying coffins 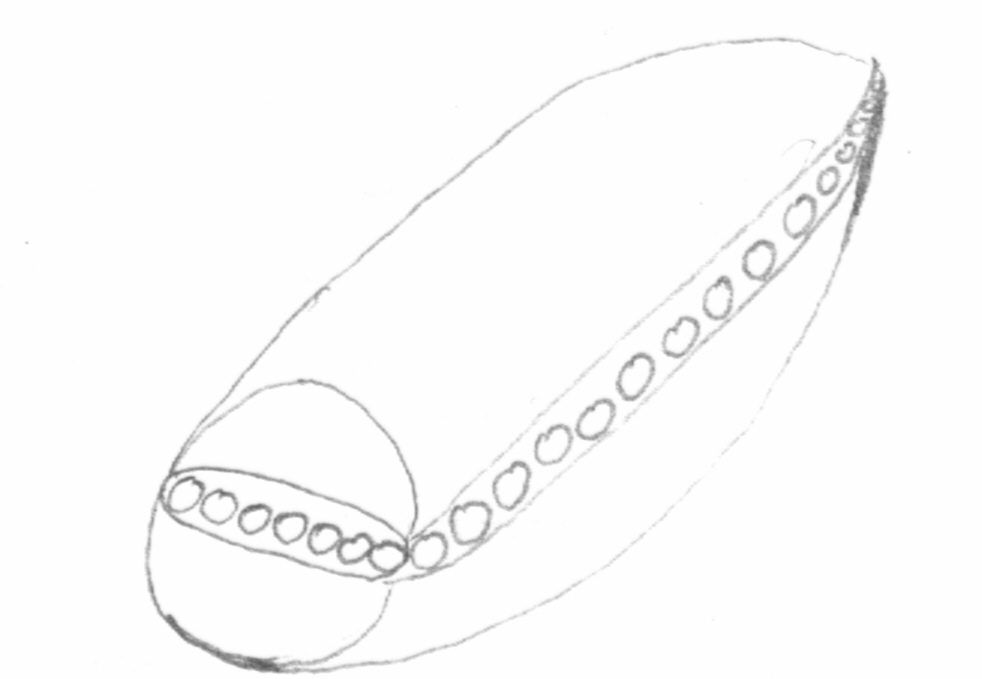 In the year 1994, I became acquainted with Michael Kiem, who was born in 1973. He told me of an UFO-sighting. One night in 1989 or a few years before, in, or after 1989, Michael stands up in order to go to toilet, when he saw a light, which was outside of his window. In front of this window, he saw a curious object, which was "bigger than a saucer in an outstretched arm". It had nearly the shape of a U-boat, and in front of the object and on each side of it there were a range of lights. Next Morning, Michael was sure, that he had only dreamed. But curiously, a friend of him, Mr. Thorsten Raaf, also born in 1973, had seen a similar object in the sky. His sighting occurred nearly in the same time. Both, Michael and Thorsten, were living in the same town at the time of the sighting. Both filled out an UFO-form, signed the affidavit and draw the object. The sketches are very similar, only Thorsten’s one had more the shape of a chest. Michael said the object flew from north to south whilst Thorsten said it flew from south to north. Both witnesses said the object had flown faster than a zeppelin. Both do not know any UFO-literature. The German UFO-research-organization GEP e. V. became also reported stories of sightings of flying large boxes. They examined a report of a sighting of such an object. The witness was fascinated in such a way that he produced a model of that what he had seen in the sky. This sighting took place in 1984 in Radevormwald, Germany. Another case of a sighted „flying coffin", examined by the GEP e. V. took place in the time between the 2th and the 7th of August 1990 near Hameln, Germany. The description war very similar to the description of that object, which Michael and Thorsten saw in „about 1989". The GEP e. V. had also examined a case of a big black box, which was seen in May 1993 over Holzwickede, Germany. The witnesses, a wife and her husband, were driving with there car along a road, and saw this object, which was landing on a near field without any noise. They noticed that there were no windows, no lights and no structures. Seen from the side, it looked like a rectangular box with a triangle-shaped upper part. The witnesses estimated the object to be 50 meters long, although the poplars on the border of the field overtopped the object only minimal. 1996 a great black box has been seen over Plön, Germany. A woman, working as an educator, saw this object in the end of February or begin of March.

The female witness wrote to me and described a UFO-sighing. She was on the balcony of her habitation in the fifth floor, when she saw at 7 o’ clock p.m. a gray "lying rectangle", which stood without any moving over a birch tree. It was dusky. The female witness thinks the object would be 80 - 100 meters high. She described red and white lights, which run along the side of the object by alternating each other. She does not hear any noise and she believed that the object was 600 meters away. The female witness observed the object in the time of 45 seconds then she was going in her kitchen to take a pot from her hearth. When she was going to the balcony again, the object has disappeared. The witness does not know any UFO-literature. She could not explain what she had seen on that day.

Sascha Shoemaker, a UFO researcher, who is living in northern Germany went to the witness, and said that she is a credulity person. She has a ten-year-old son, who has seen the object, too. The house in which the witness lives, is one of the biggest in Plön, and lies at the top of a hillock. She had a good overview upon the city. Mr Shoemaker was reconstructing the case and noted that the witness had estimated the size of the object much too large. According to Sascha Shoemaker the object would has been 40 to 55 meters upon the ground.

On 18/7/1995 half an hour after midnight, a young man in a town in Brandenburg, Germany, heard a strangeness noise, whilst he was smoking a cigarette. He looked upon the sky to search an object, which had could be the source of the noise. The sky was cloudy, and the witness now saw a cigar shaped object, which was flying below the clouds. The young man described it as a „gray stick" or a "flying cigar". He estimated the height of the object to 200 meters and its lengths to 30 meters. The witness noted that the object has had no wings. At the front of it and behind the object, there were respectively two lights, which have been described as "brighter than a flash-light". And they were blinking. When the lights were blinking up, the witness heard a strangeness sound like the chirping of a cricket. This noise was a mixture of a humming, crackling and growling. He said the sound has made him frightened. The object had passed equally, and he could observe it very good. At the beginning of the sighting, the object was approximately 900 meters and at the end of it approximately 450 meters upon the ground. The witness saw the object in a period of one or two minutes, as he estimated. Perhaps he had the distances and the size overestimated, too. In the most UFO-cases this overestimating occurs. However, this sighing is remaining as a riddle. In Parnarama, a little town near Sao Louis, Brazil, there should be five people have died after an encounter with chest-shaped UFOs, who could send out strong beams of light. These objects have been named by the citizen "the chupas". This "chupas" allegedly fly over woody areas and through river-valleys. In the most of the cases the victims, who all were stag-hunter, reported that the "chupas" have looked like food-freezers. They were flying upon treetops and send out a beam of light to the ground. They would have made a sound that remained equal and sounded humming. The objects were too little to take up human pilots. At the bottom side, the object had lights, and those lights had sent out beams like a reflector of a car. It is interesting, that those box-shaped UFOs, who have been hardly described in literature, can be seen relatively often. Usually UFO-sightings - when UFOs of the same type are being seen - occur within a wave of UFO-sightings, or there is an initial sighting, and the other cases are reported after reading of this initial sighting in newspaper.

Almost all UFO sightings - most of them are not more than a point of light in the sky - can be identified naturally. Maybe, the flying coffins could be identified too, if we would have more dates, more accurate descriptions by the witnesses and so on. Maybe we could identify them, but maybe we could not do so...

(Michael Kiem and Torsten Raaf made the sketches.)